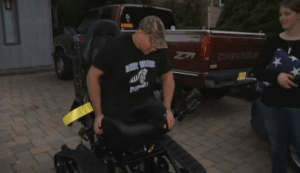 With a knock at the door and an honor guard secretly waiting on the street, POAM President Jim Tignanelli personally delivered a top of the line Action Track wheelchair to the home of Aaron Alonso.

It was the 13th Anniversary of the attacks on 9/11, making the moment all the more special.

Aaron Alonso, a New Jersey Marine who lost both of his legs after stepping on an IED in Afghanistan in February of 2014?. A couple months later, while visiting the Walter Reed Memorial Hospital in Washington D.C. during police week, Tignanelli met Alonso and was inspired by his positivity and spirit.

The decorated Marine Sargent didn’t waste any time putting his specialized all-terrain wheelchair to the test, and took his daughter for the first ride while all those in attendance gave a warm round of applause. The chair is designed to go where no regular wheelchair can go.

“This thing is awesome. When I first got injured the only thing I wanted to do was to walk and play with my daughter again. Walking is taking a little bit of time and there are always going to be limitations but this is just going to increase my freedom,” said Aaron Alonso. “If I could go back and do it again, I’d still go back and do it the same way. I’ve grown immensely from this experience and others have grown through my hardships. I ultimately think I’m a better person for going through what I’ve gone through.”

Defender Mobility & POAM Give Away Chair!

A Virginian Veteran is Next!